On January 9th, Pope Francis met with members of the Diplomatic Corps accredited to the Holy See and offered them his New Year's wishes. In the audience, the pontiff recalled that the task of diplomacy is to resolve differences and create a climate of trust. As an example, Francis mentioned, among other things, the controversial China agreement, which was recently extended for two years.

The German lay movement "Neuer Anfang / New Beginning" presented a letter to the Holy Father at the General Audience. The letter intends to be a response to the "Letter to the Pilgrim People of God in Germany" written by Francis in 2019 and reiterates the fear that the "Synodal Way" supported by the German Bishops' Conference could lead to a schism in the Church.

In early January, Pope Francis appointed Angelo Accattino, titular archbishop of Sabiona, as Apostolic Nuncio to Tanzania. Accattino was ordained a priest in 1994 and previously served as apostolic nuncio to Bolivia. He is 56 years old.

From January 31st to February 5th, Pope Francis will visit the Democratic Republic of Congo as well as South Sudan. The Apostolic Journey will focus on meetings with victims of violence; the Vatican itself calls it an "Ecumenical Pilgrimage for Peace." Francis' trip to Africa was originally scheduled to take place as early as 2022, but was postponed due to the pope's health problems.

Trending
Vatican sends letter of concern to the German Bishops' Conference
Vaticano Update: Top 5 Vatican news stories of the week
Ganswein's book on his life as a Secretary of Pope Benedict XVI
How to visit the tomb of Benedict XVI
Investigation into ‘Vatican Girl’ cold case reopened amid rekindled public interest 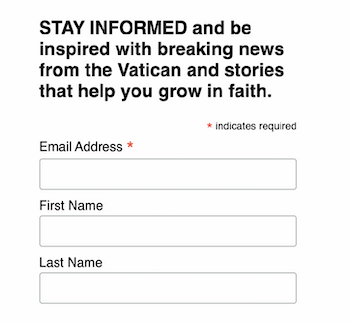